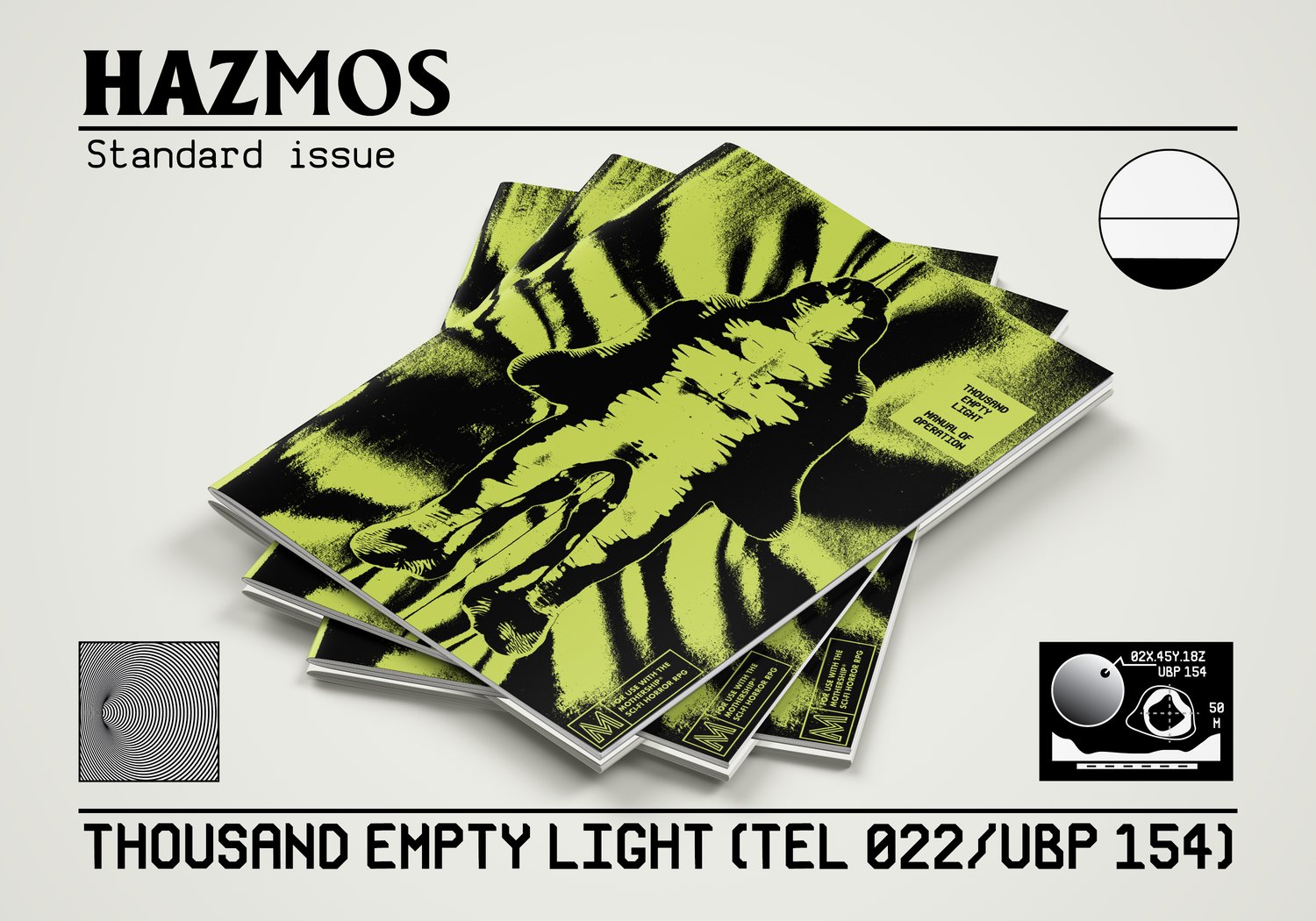 Note: this is a pre-order page. Orders will not be shipped out until later in the year (November at the latest). This product first appeared on Kickstarter.

Thought space was full of horror? Try being trapped 50 metres underwater. On your own. In the dark.

Thousand Empty Light is a source book and solo adventure for Mothership RPG (1E) set in an abandoned underwater tunnel on an uninhabited planet.

You, the player, take on the role of a lamplighter hired by the HAZMOS service corporation. Your job? Enter the tunnel alone and restore power and light to each section.

Sounds simple enough... but as you proceed through the tunnel you will discover that you’re not alone in the dark and things aren’t quite what they seem.

Expect a blend of psychological, conspiracy and cosmic horror. Play to find out what secrets lie at the end of the tunnel.

Thousand Empty Light is written throughout as an in-universe corporate document, with a dash of red tape bureaucracy here, a splash of 80s synthesiser manual there. There are no explicit references in the text to playing a game. Instead it aims for full immersion, with gameplay hints sprinkled between the lines.

Essentially this is an experiment in tabletop adventure design, requiring a healthy amount of interpretation from the player. (But fear not: included with the zine will be a digital example play document to help guide players.)

Want to find out more?

A work in progress, text only version is available on itch.io.

Fancy watching the game played? Plus One EXP has you covered.

Like to read more about my thoughts on solo adventure writing? I've got an article for that.

The Thousand Empty Light zine will be risograph printed full-bleed in black. It will be just slightly smaller than A5 and something like 32-40 pages, printed on Evercolour Cream 80gsm, and covers on Context Pistachio 170gsm. The particular details may change slightly but this is a good indication.

It wouldn't be a Mothership campaign without a patch. This one, the LONER patch, is dedicated to all the solo players out there.

Please note: the tape cassette is now sold out.

The dust cover is designed to wrap around your physical zine. It will be risograph printed in metallic gold on one side of dark card stock. For an added bonus, the inside flaps will contain extra material for your adventure, including a missing persons table.

The bookmark will measure something like 74x210mm and will be risograph printed on both sides on Context Birch 260gsm card. This will be a handy reference containing the Semiotic Standard table of signs. Useful for your playthrough of Thousand Empty Light, sure, but this is specifically designed to allow you to use the Semiotic Standard with other adventures or RPGs, solo or otherwise!

A note on customs / import fees

Please take into account any customs or import fees that might occur in getting a package to you from the UK. Unfortunately I cannot be held responsible for these.
0 Items in your cart
Keep shopping